skip to main | skip to sidebar

Russian President pushing for a conclusion to a 'short-term visa' waiver agreement with the European Union at today's EU-Russia Summit in Brussels. 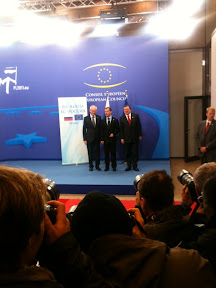 Dave Slays A Dragon, Gets Eaten By His Horse

How daring it must have felt, how brave and noble, but this was the work of a Freelance, not a Knight. David Cameron, in a single act of timidity dressed as authority, has decimated the UK's political and financial influence for a generation.
Cameron has focused on the small view of local politics and party unity, failing to grasp the future necessity to perform a volte face. When it comes to it, it will probably not be his face signing up to an inevitable new Treaty, and there is no conceivable way in which the other EU States will exempt the UK from financial services regulation at a later date. The City of London may rejoice today, but it will pay.
The deeper irony is the financial markets are more innovative than hamstrung prime ministers. Had Cameron accepted the unity of Europe and pulled back from a veto, the City would have found a way to innovate and grow. And the price? Already it is being paid, by the City of London. This was no confidence trick, though Cameron's strategy is founded on illusion.
Posted by European Business Express at 00:48 No comments:

Posted by European Business Express at 00:35 No comments:

Summit prep is underway, the trickle of press and officials this morning will become a flood this afternoon. Genteel lounge lamps at the work stations, Martha Stewart must be here... 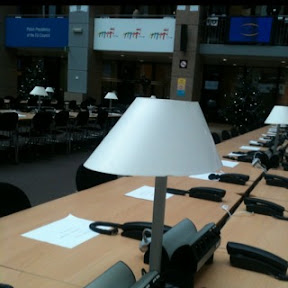 The spokesperson of Catherine Ashton, High Representative of the Union for Foreign Affairs and Security Policy and Vice President of the Commission, issued the following statement today: "The High Representative expresses concern about the detention of hundreds of protesters demonstrating after Sunday's Duma elections, and about reports of police violence against activists, journalists and bystanders. She recalls the need to respect freedom of assembly and expression. The High Representative also reiterates her support for the work of the OSCE / ODIHR election observation mission and its preliminary assessment, and expects Russian authorities to act on their findings."
Well, that's nice. Hopefully the EU won't use the same overwhelming insults it dropped on the Ukranian thugs when they conveniently imprisoned Tymoshenko... yes, the same Tymoshenko the E.Parliament, Council and Commission were all so sure would be released within days of her sentencing. Next time, MEPs might like to keep their Foreign Minister entertained in the Parliament's Mickey Mouse Cafe (this is it's real name...) for a month or two?
Posted by European Business Express at 06:24 No comments: